Two hundred and eighteen rights defenders in Shanghai signed a public appeal urging the United Nations not to elect China to the 47-member Human Rights Council. The election will be held on November 12 among UN member states in the General Assembly.

China is one of the five candidates for the four seats to be filled by Asia-Pacific states (which include countries from the Middle East). The other candidates are Jordan, Maldives, Saudi Arabia, and Vietnam. Among the voluntary pledges made by China for its membership are: “To continue to strengthen the development of democracy and the rule of law [and] push forward the reform of the judicial system.”

The appeal is dated October 21, 2013, the day before China’s Universal Periodic Review at the Human Rights Council in Geneva

Below is the appeal in English translation by Human Rights in China, followed by the signature sheets. (Click here for the original Chinese of the appeal.)

Tomorrow, the United Nations will conduct its second Universal Periodic Review of China. We, 218 Shanghai citizens who refuse to be slaves, urgently appeal to all nations to not fall for the lies of the Communist Party of China again, praise it, or be influenced by short-term economic interests. Instead, please evaluate China in accordance with the standards of the Universal Declaration of Human Rights and international human rights covenants, and stand with the people of China to courageously say “No” to a dictatorial authoritarian government that systematically violates human rights.

We, 218 human rights activists, strongly oppose China’s becoming a member state of the 2014-2016 UN Human Rights Council. China served two terms as a member state, from 2006 to 2012. In 2009 the Universal Periodic Review evaluated China. Four whole years have passed, and China’s human rights situation has not improved in the slightest. The people of China continue to endure all kinds of suffering in a vile human rights environment. Twenty-five years after the June 1989 massacre in Beijing, the Communist authorities have never stopped infringing on human rights, and have continuously deprived citizens of their rights to freedom of speech, publication, the press, association, assembly, and procession, and the freedom to protest, strike, and worship. They have unremittingly violated human rights by subjecting citizens to arbitrary detentions, enforced disappearances, enforced “suicide,” forcible demolition, land grabs, violent forms of birth control, forced abortions, incarcerations in black jails, unlawful house arrest, violent beatings, torture, unlawful restrictions on entering and exiting the country, guilt by family association, and other means.

China has been a signatory to the United Nations’ International Covenant on Economic, Social and Cultural Rights and International Covenant on Civil and Political Rights for 15 years.* But the National People’s Congress has not, to this date, ratified the ICCPR. It has ratified the ICESCR but made reservation on article 8.1, thus gutting the core provisions of the Covenant, depriving the right of any person to form trade unions or other social organizations and the right to join labor organizations or social associations of one’s choosing. In Mainland China, the civil rights in the Constitution are just window dressing. The rulers’ power supersedes the civil rights provided for in the Constitution.

Chen Jianfang and Cao Shunli were invited to Geneva, Switzerland, to participate in human rights training and observe UN human rights procedures, but on September 14, 2013, they were prevented by the CPC from leaving the country. While boarding at Guangzhou’s Baiyun Airport, Chen Jianfang was informed by a police officer with the badge number 038882 that she was forbidden for life to leave the country, and was administratively penalized. Later she was threatened by the Shanghai police, who said: “You are in a socialist country; associating with foreign elements is treasonous and counterrevolutionary. You are not defending your own rights; you are inciting people to oppose the government. If you go on like this (defending human rights), your daughter will never be able to find work and will blame you.” Cao Shunli disappeared after being prevented from leaving the country at the Beijing Airport. Cao’s family, friends, and those concerned have inquired with the Beijing police about her situation, but to date her whereabouts remain unknown.

[Heading of signature sheets, translated by Human Rights in China]

Between 2006 and 2012, a period when China was twice a member of the Council, it not only did not solve the problems of people’s livelihood but continued—and has continued to this date—trampling on human rights, by means including forced residential demolition, land grabs, and miscarriages of injustice. Over these years, the common people have had no place to bring their complaints. Instead, they have been detained; ordered to serve Reeducation-Through-Labor; sentenced to prison; locked up in black jails; disappeared; and died, became disabled, or were injured from beatings. We call upon the United Nations to not listen to the lies anymore, and call upon democratic countries to stand with the people of China and courageously and firmly say “no” to dictatorial authoritarian rule. 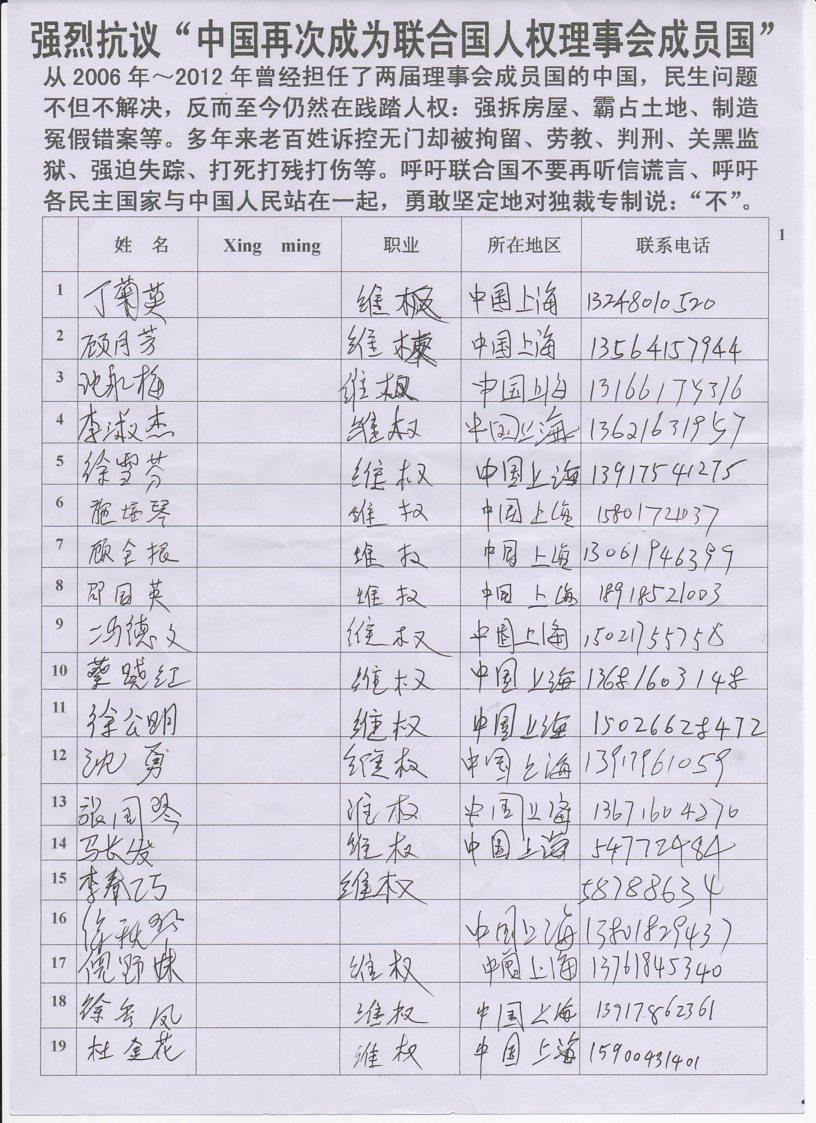 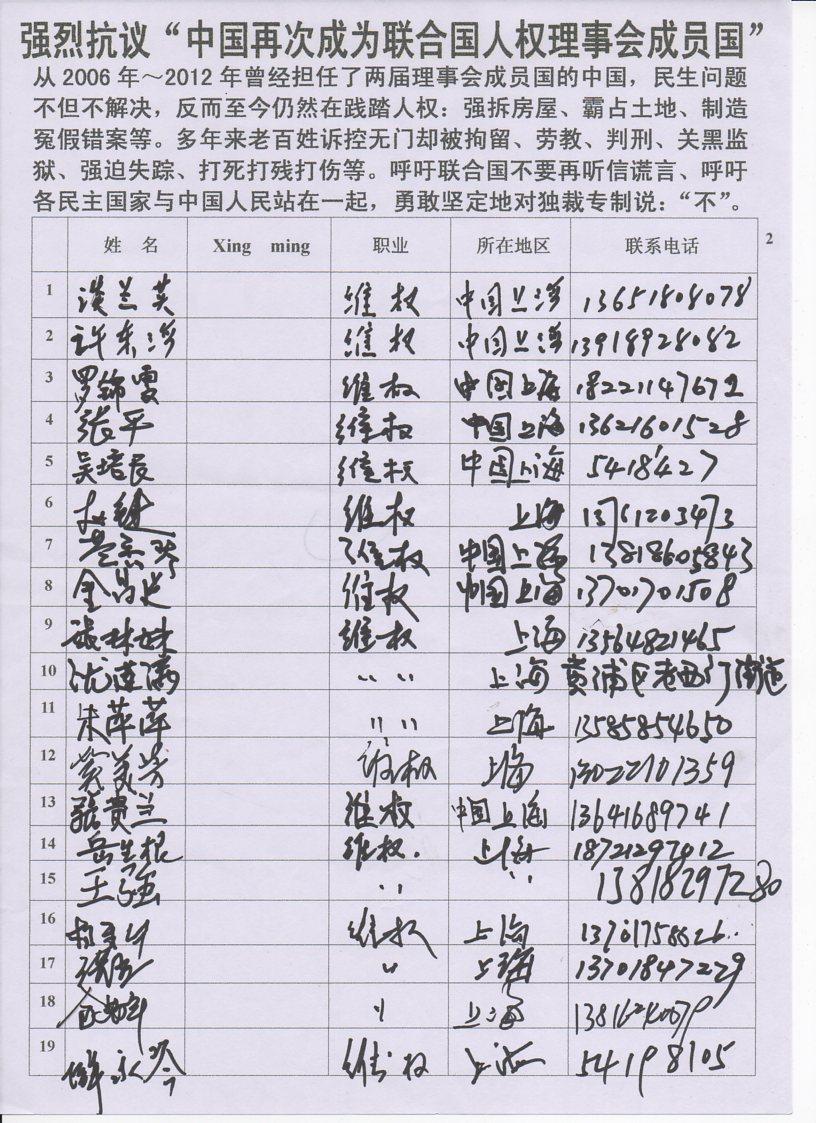 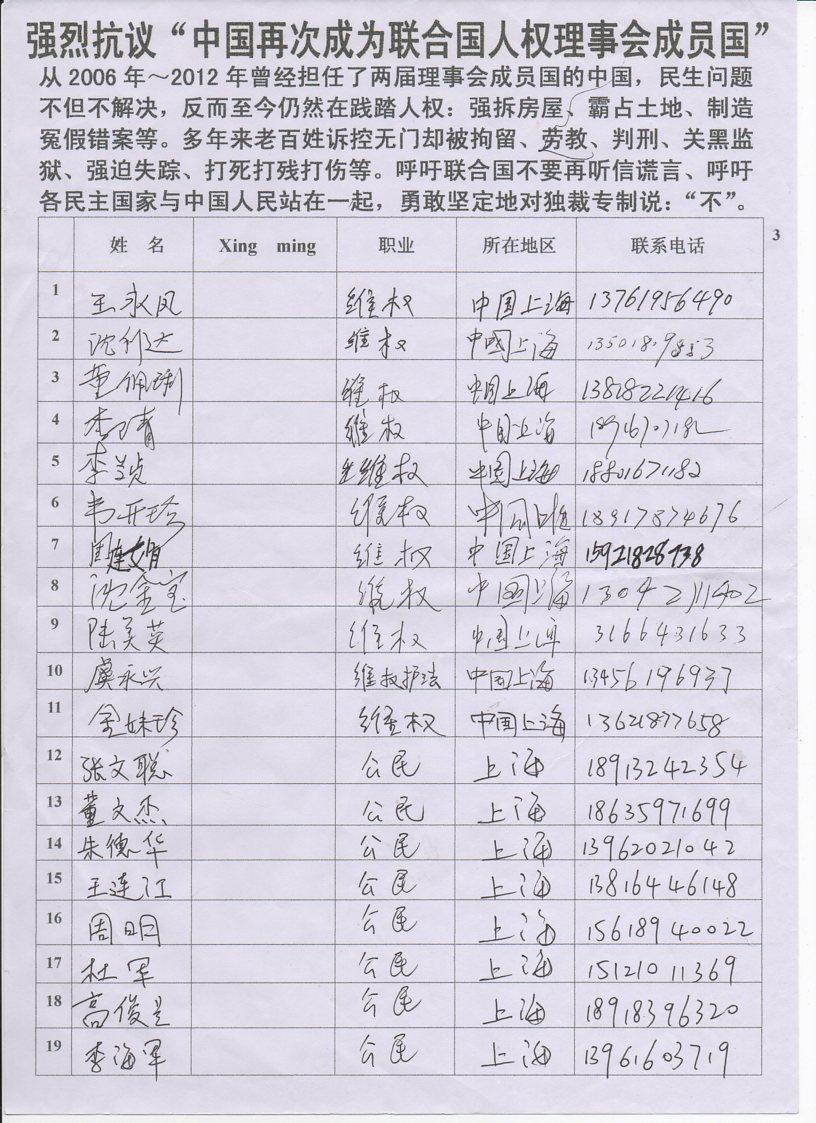 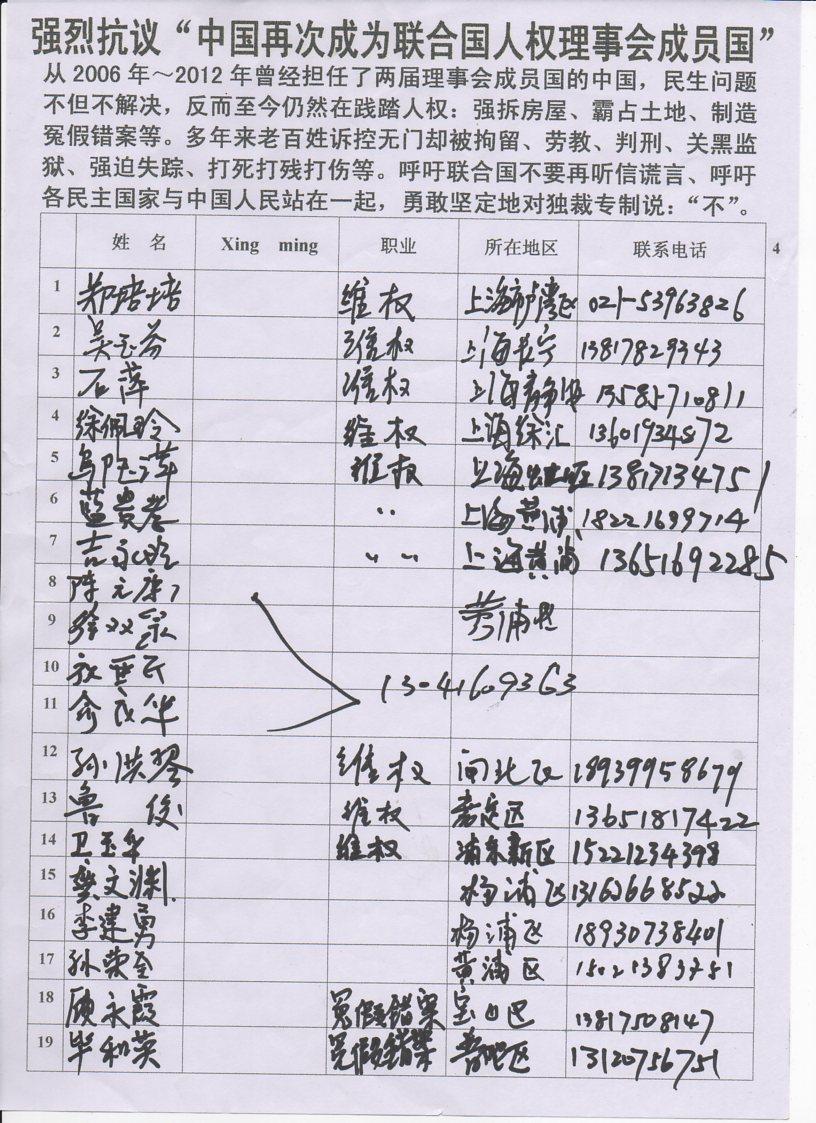 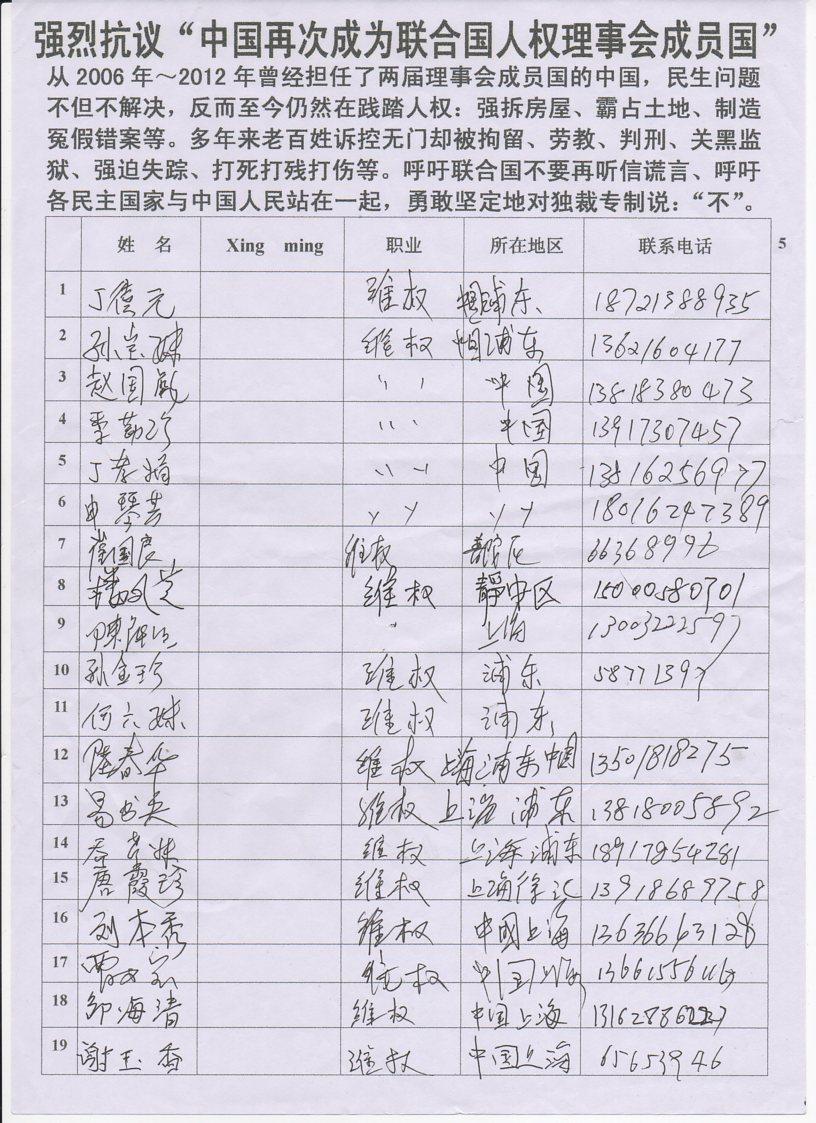 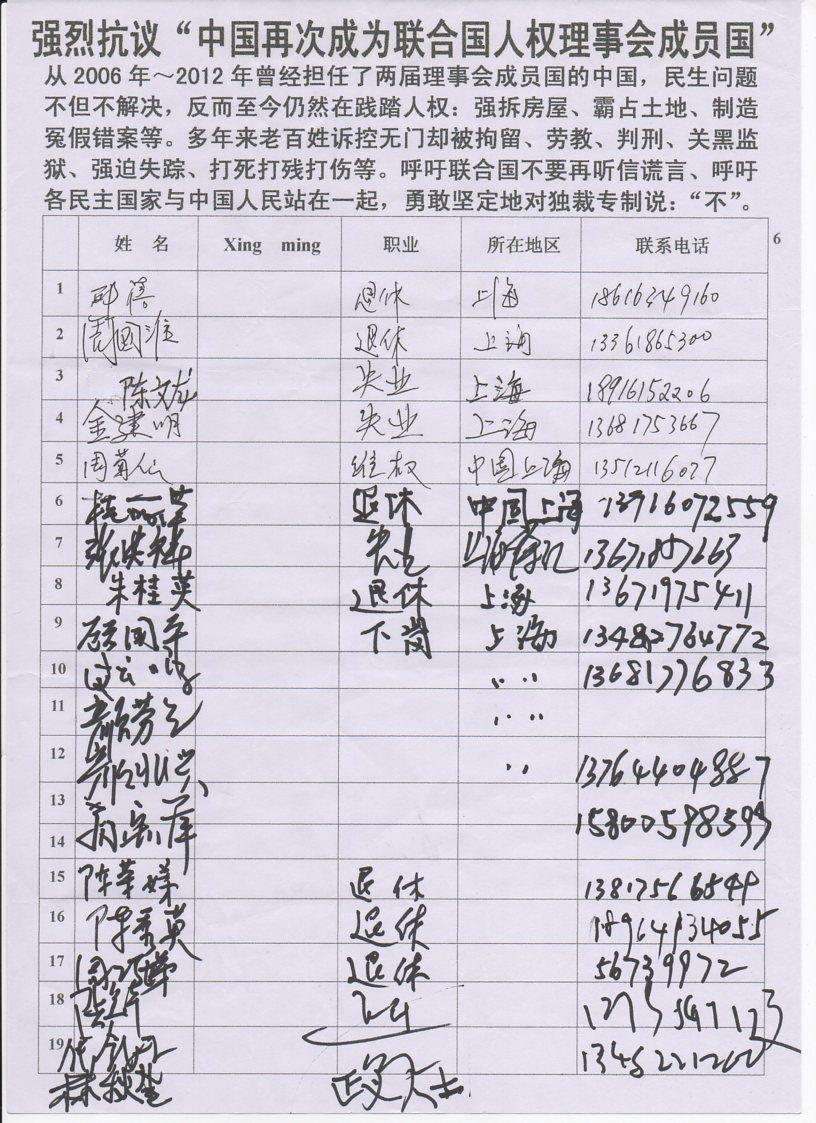 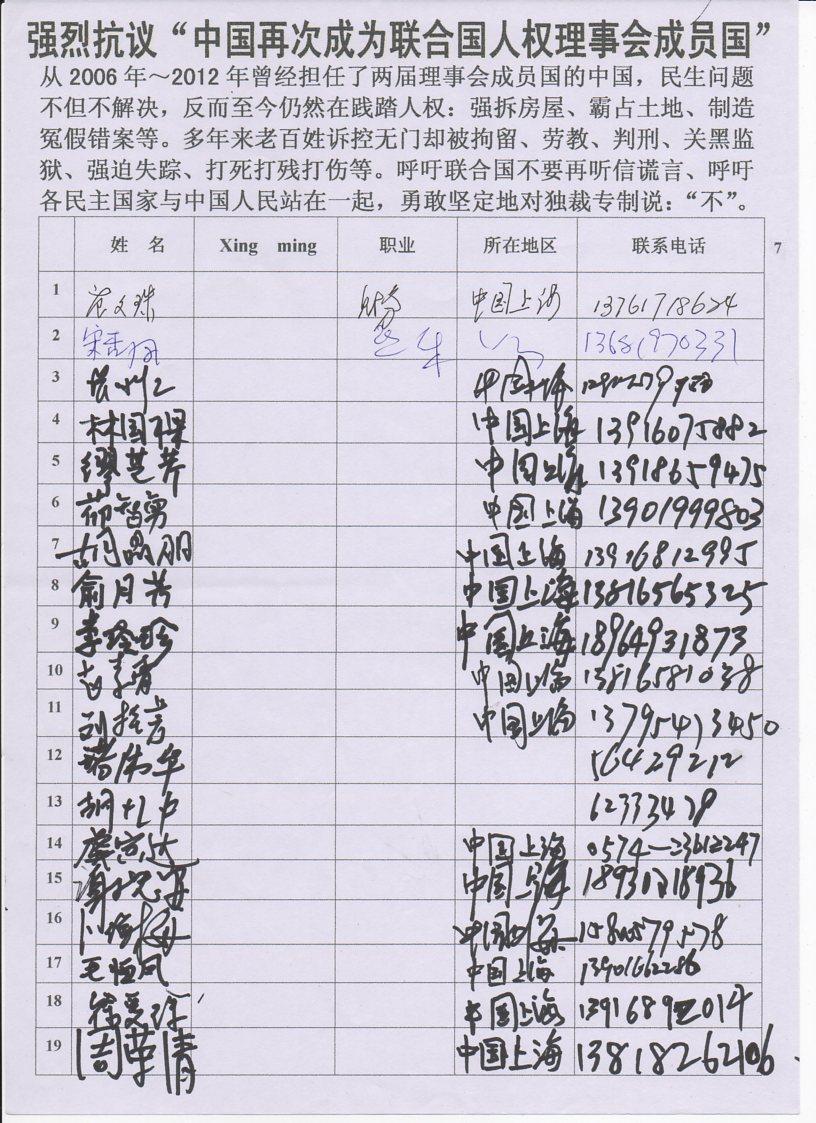 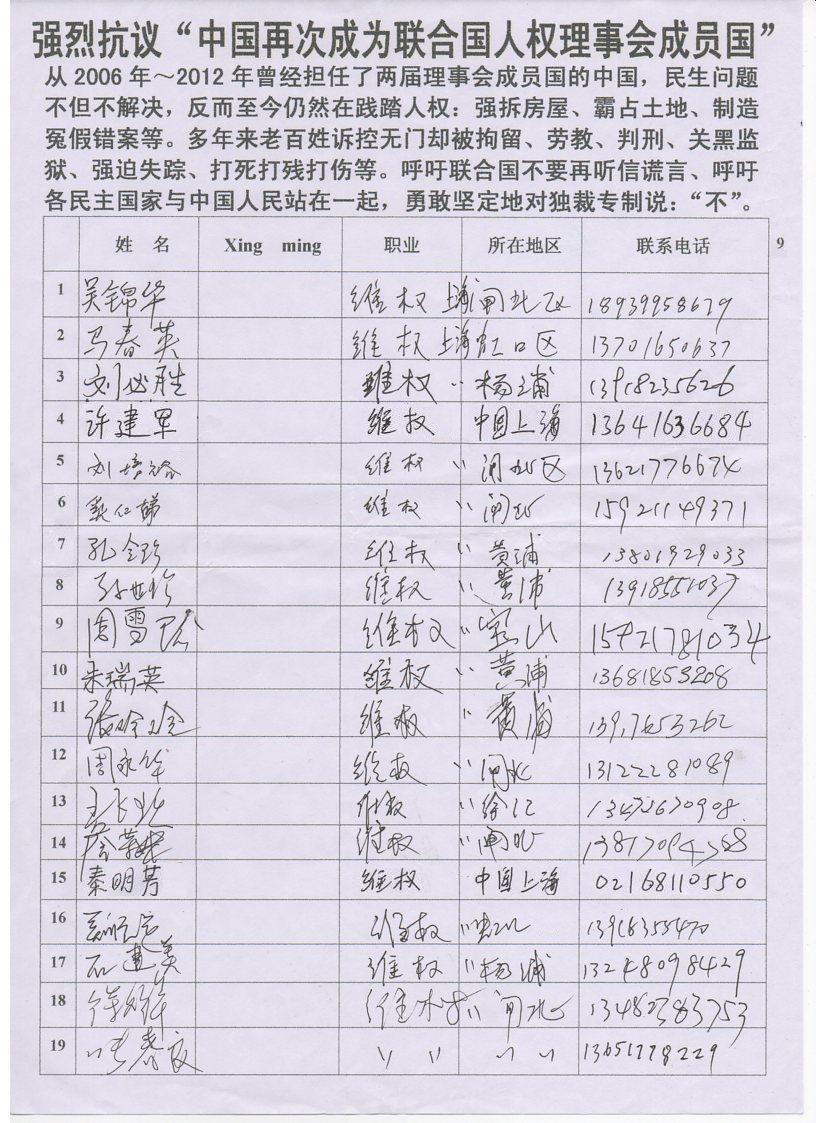 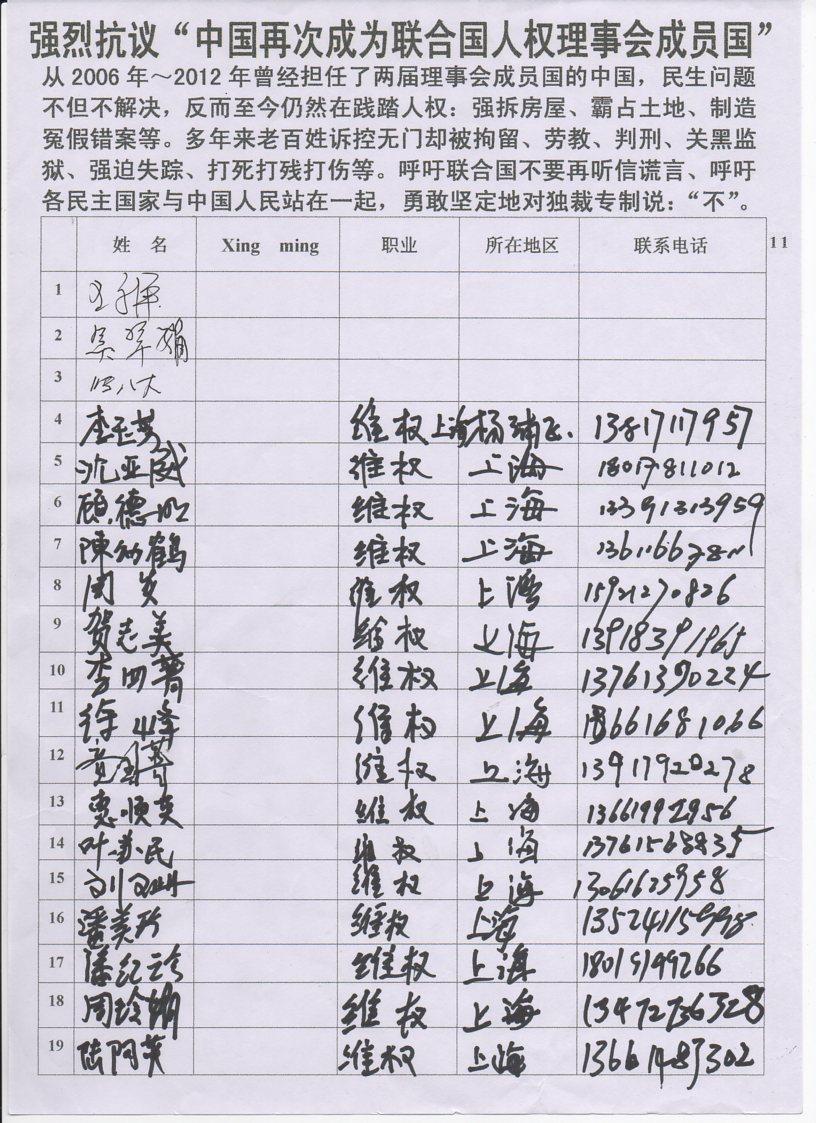 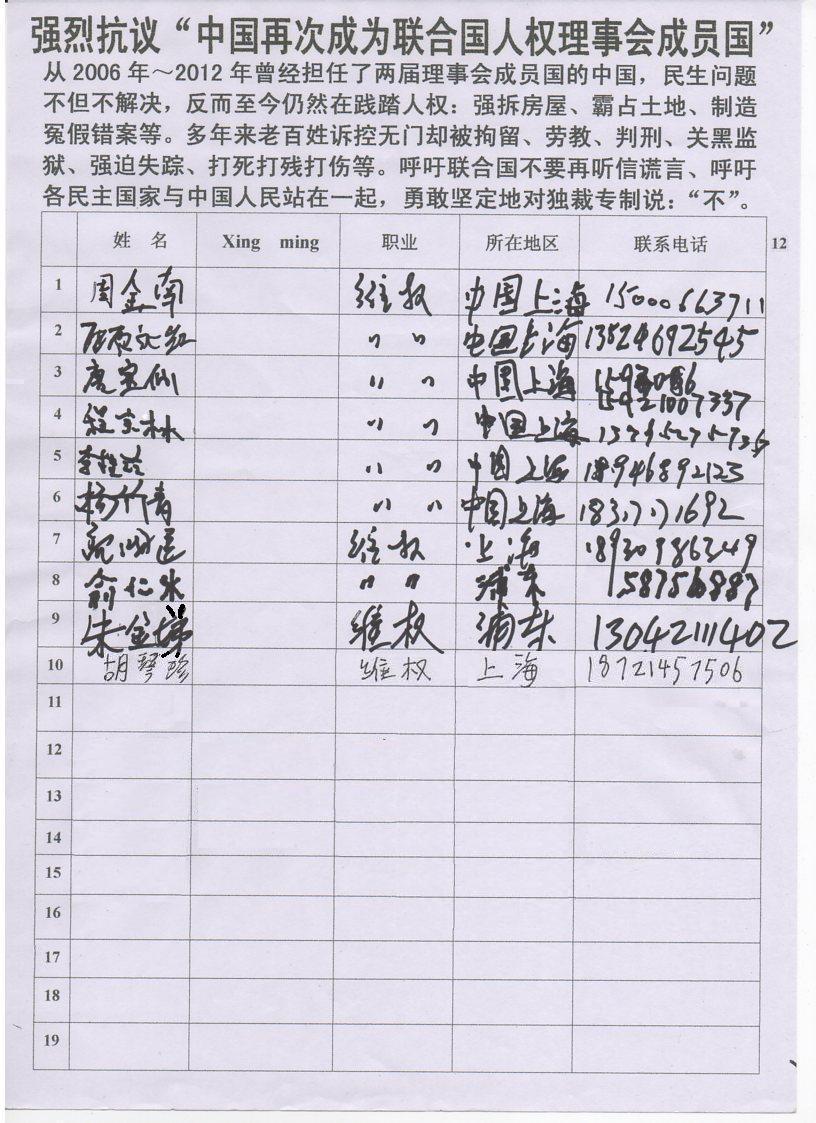