Increasingly frequent social conflicts and economic downturn have not only presented China’s regional governments with overwhelming financial pressure, but also caused the central government a serious funding problem for its stability maintenance system.

The Huge Cost of “Stability Maintenance”

The types of social protest in China are determined by the country’s special pattern of economic development. Economic growth in China depends on real estate and the resources sector—petroleum, heavy chemical industry, and mining. Social protests thus concentrate on these sectors. The first major type of protest is land rights defense. This includes housing demolition and eviction in cities and land requisition in the countryside. The second major type involves environmental rights defense, because  pollution caused by the resources sector such as the heavy chemical industry seriously endangers the wellbeing of the people. And, the third type involves corruption among local government officials. Many corruption cases have to do with local officials embezzling land requisition compensation funds. 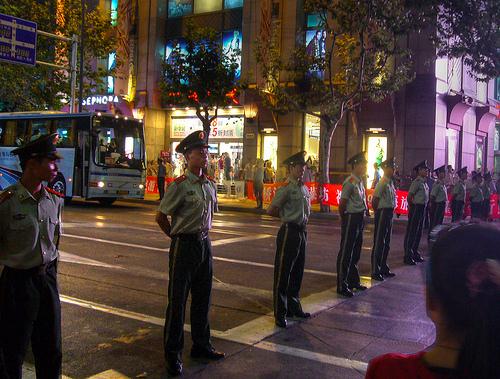 “Stability maintenance offices” must fully understand all social development problems, not just those in the political and legal spheres. Thus, they comprise not only the departments of public security, procuratorate, the judicial system, and state security, but also propaganda departments. This system also maintains a huge informant network. For example, there are information staff members (i.e. informants) at universities, middle schools, civic institutions, business enterprises and in rural areas. According to a 2010 interview published on Xinhua Net, Liu Xingchen, assistant to the director of Kailu County, Inner Mongolia, and Party Secretary and Public Security Bureau Director, bragged to the reporter that he “has a huge informant network” and stays “highly alert” to any dissent and protest. How large is this network? Let’s take a look at the numbers Liu Xingchen provided: The number of informants under the Kailu County Public Security Bureau is as high as 12,093. For a county with a population of 400,000, excluding one quarter of the population who are underage, there is at least one informant for every 25 adults.4

As mentioned above, the main cause of China’s social conflicts is excessive extraction of resources by government at all levels, creating a vicious cycle between stability maintenance and economic development. Local officials need GDP growth to demonstrate their effectiveness, and are compelled to undertake a large number of projects. The most profitable projects are real estate and polluting industries (because China has very lax oversight on environmental pollution, and one can pay very little, or even nothing, for polluting). However, real estate development involves land acquisition and property demolition, and industrial pollution triggers environmental rights defense actions by local residents. The more the economy develops, the more conflicts there are between government officials and the people, and the more stability maintenance is needed, requiring greater expenditures. City and county governments all feel increasing strain in funding stability maintenance. The November 2011 protest against the government’s land grab in Wukan Village, Shanwei City, Guangdong Province, lasted several months. The Shanwei municipal government spent a large sum to “maintain stability” in the village. The party secretary of Shanwei, Zheng Yanxiong, vented in his internally circulated speech: “You think it’s free to hire armed police? Hundreds of armed police and regular police living here has made our mayor’s wallet thinner by the day.”13

In his 2010 article, “The Astronomical Cost of Stability Maintenance is Eroding Local Government,” in Lianhe Zaobo, Xie Yue reported: “According to published Chinese government statistics, on average, local governments shoulder about 70 percent of their stability maintenance budget, with the remaining 30 percent coming from the central government. …”14

“There is a great regional difference in local governments’ spending on ‘stability maintenance.’ The more developed the area, the more it can spend.” And the converse is also true: the poorer the area, the less it can afford. “In the past 15 years, the top five biggest municipal spenders on public security, procuratorate, court, judicial administration system, and people’s armed police were Guangdong, Jiangsu, Shanghai, Zhejiang and Shandong. The smallest five spenders were Guizhou, Gansu, Qinghai, Tibet and Ningxia. However, the stability maintenance expenditures of a poor region may appear small in absolute amounts, those may eat up a big portion of its revenue. In 2008, number one-ranked Guangdong spent nearly 40 billion yuan [~$6.42 billion] on public security, procuratorate, court system and people’s armed police. Bottom-ranking Ningxia spent only 1.9 billion yuan [~$300 million],” Xie Yue wrote.15

Even though spending was relatively less in backward areas, it still accounted for a large percentage of local budgets. Xie Yue said: “In 2008, only 6.34 percent of Shanghai’s annual expenditure was on public security, procuratorate, court system, and people’s armed police. But in economically backward Ningxia this percentage was 28.4 percent. These statistics show that backward areas were under much greater economic stress due to ‘stability maintenance’ than developed areas. Many provinces run in fiscal deficit due to ‘stability maintenance.’”16

Beginning 2012, local governments have been facing even greater financial pressure. With the introduction of stricter real estate market controls in 2011, local land finances were hard hit. Chinese Index Institute statistics indicate that in the first half of 2012, the total value of land transfer in China’s 300 cities was 652.598 billion yuan [~$104.77 billion], a decrease of 38 percent from the same period the previous year. Even in the wealthiest regions of the country—Beijing, Shanghai, Zhejiang and Guangdong—the revenue growth rate for the first half of 2012 went down to less than 10 percent from 20-to-30 percent in the same period last year. Due to the difficulties in transitioning from an export economy to a consumer market economy, the developed southeast coastal region also suffered serious financial downturn. Rich areas such as Shenzhen and Dongguan are on the verge of fiscal deficit.18

The Two-Faced Role of Regional Governments: Creator of Social Unrest and Maintainer of Stability

According to statistics provided by the article “Public Security Bill,” in the May 2011 issue of Caijing Magazine, the public security expenditures of local governments surpassed those of the central government. The amounts were 521.968 billion yuan [~$83.80 billion] and 102.452 billion yuan [~$16.45 billion], respectively, representing a ratio of greater than 3:1.19 This shows that local governments are the prime actors of stability maintenance.

We can see from this that local governments are the real culprits in the disputes and protests caused by land acquisition and industrial pollution. But since the local government has the executive power and judicial administrative power, they can use violent means to suppress people at any time. A great number of cases demonstrate that those whose interests have been harmed tried to get justice through legal channels. But either their cases are not accepted by the local courts or they lose their cases after exhausting their energy and money. If the people protest, they will most likely be violently suppressed by police dispatched by local authorities. They may even be arrested and labeled protest leaders and end up in prison. When we see the logic of the relationship of the above facts, things are terrifyingly simple: China’s local governments at different levels are themselves creators of social conflict, and they are the biggest threat to public security.

In summary, “stability maintenance” in China has become an industrial chain. At its top is the government’s plundering through land requisition, property demolition, and industrial pollution in order to preserve tax and financial revenues. At the middle of the chain is the government’s interception of complaints and petitions, crackdown, control of public opinion, propaganda, and informants. At the end of the chain is the judicial system, mental hospitals,24 and prisons. This new industrial chain provides a huge profit-sharing opportunity for China’s government officials and their relatives at all levels. Everyone—from the central government ministries to local government and the poor countryside—is connected to this chain of interests. Such an iron-fisted stability maintenance system not only makes it financially difficult for the government to continue to “maintain stability,” but also drags China into a vicious cycle of “the more one tries to maintain stability, the less stable it is.”

He Qinglian (何清涟), is an economist and author of China’s Pitfall and Media Control in China. A graduate of Hunan Normal University, with a master’s degree in economics from Shanghai’s Fudan University, He Qinglian worked in the propaganda department of the municipal Communist Party Committee in Shenzhen before becoming a writer and editor for the Shenzhen Legal Daily and working at Jinan University. He Qinglian moved to the United States in 2001.

4. Malcolm Moore, “Chinese police admit enormous number of spies. A Chinese police chief has said he uses more than 12,000 spies to inform on a remote county of just 400,000 people, an admission that lays bare the enormous scale of China's surveillance network,” Feb. 9, 2010, http://www.telegraph.co.uk/news/worldnews/asia/china/7195592/Chinese-police-admit-enormous-number-of-spies.html.^

24. “Research Reveals that China Has More Than 100 Million Mentally Ill, 16 Million Seriously Ill,” Outlook Weekly, May 30, 2010, http://news.xinhuanet.com/politics/2010-05/30/c_12158168.htm. This article classifies ideological crime as mental illness, and submits that “uncertainty due to confusion and even disintegration in values, psychological instability arising from severe social inequality, and the disparity between individuals’ aspirations and reality can all induce mental illness.”^