In Memory of Xu Jue, a Key Member of the Tiananmen Mothers

We announce with deep sorrow that Ms. Xu Jue, an important member of the Tiananmen Mothers, died at 8:51a.m. on April 24, 2017, at age 77. Ms. Xu Jue was diagnosed with colon cancer in 2009, and shortly after her surgery, the cancer spread to her liver. She passed away after an eight-year battle with liver cancer, after living a life with love, diligence and courage.

In a simple ceremony at the Beijing Babaoshan Cemetery on the morning of April 26, Ms. Xu's family and friends said farewell to this optimistic, strong, and brave mother. You Weijie (尤维洁), Wu Lihong (吴丽虹), Zhang Xianling (张先玲), and Huang Jinping (黄金平) of the Tiananmen Mothers attended the ceremony, and presented a wreath from the group, as a token of the condolences from all its members.

Ms. Xu Jue was born in 1939, a native of Shaoxing, Zhejiang Province. She moved to Beijing with her parents in 1956. In 1959, she was admitted to the Beijing Institute of Geology with flying colors. After graduation, she devoted her entire professional life to a career in China's geological exploration and rare metal research work, a career that she loved. Even at the end of her life when she was in pain and extremely weak, she was still revising her articles on geological research. The Chinese Academy of Geological Sciences and her colleagues gave her high praises for her professionalism and outstanding contributions.

Ms. Xu Jue is the mother of two children; her eldest son, Wu Xiangdong, sacrificed his young life for the cause of Chinese democracy during the June Forth massacre in 1989. The loss of a beloved son is a fatal blow for a mother; but she did not fall. Instead, she resolved to join the Tiananmen Mothers and came forward to condemn the authorities’ slaughter, to defend the dignity of the deceased, and call for justice.

In the 28 years after the June Forth massacre, Ms. Xu never flinched in the face of all kinds of dangerous situations and plights, not even when subjected to suppression, intimidation, monitoring, following, and persecution by the authorities. She always faced the difficulties squarely and unswervingly, and held fast to the beliefs of the Tiananmen Mothers: “tell the truth, refuse amnesia, seek justice, and appeal to conscience”; and maintained the Tiananmen Mothers’ demands: independently and impartially investigate June Fourth and publicize the truth, provide compensation to June Forth victims and their families, and hold the responsible people accountable. Ms. Xu Jue’s strong, honorable, and righteous life is the honor and pride of the Tiananmen Mothers!

Rest in peace, Ms. Xu Jue! We wish you a smooth journey! We will continue your unfinished last wish until the day when we can obtain fairness and justice! 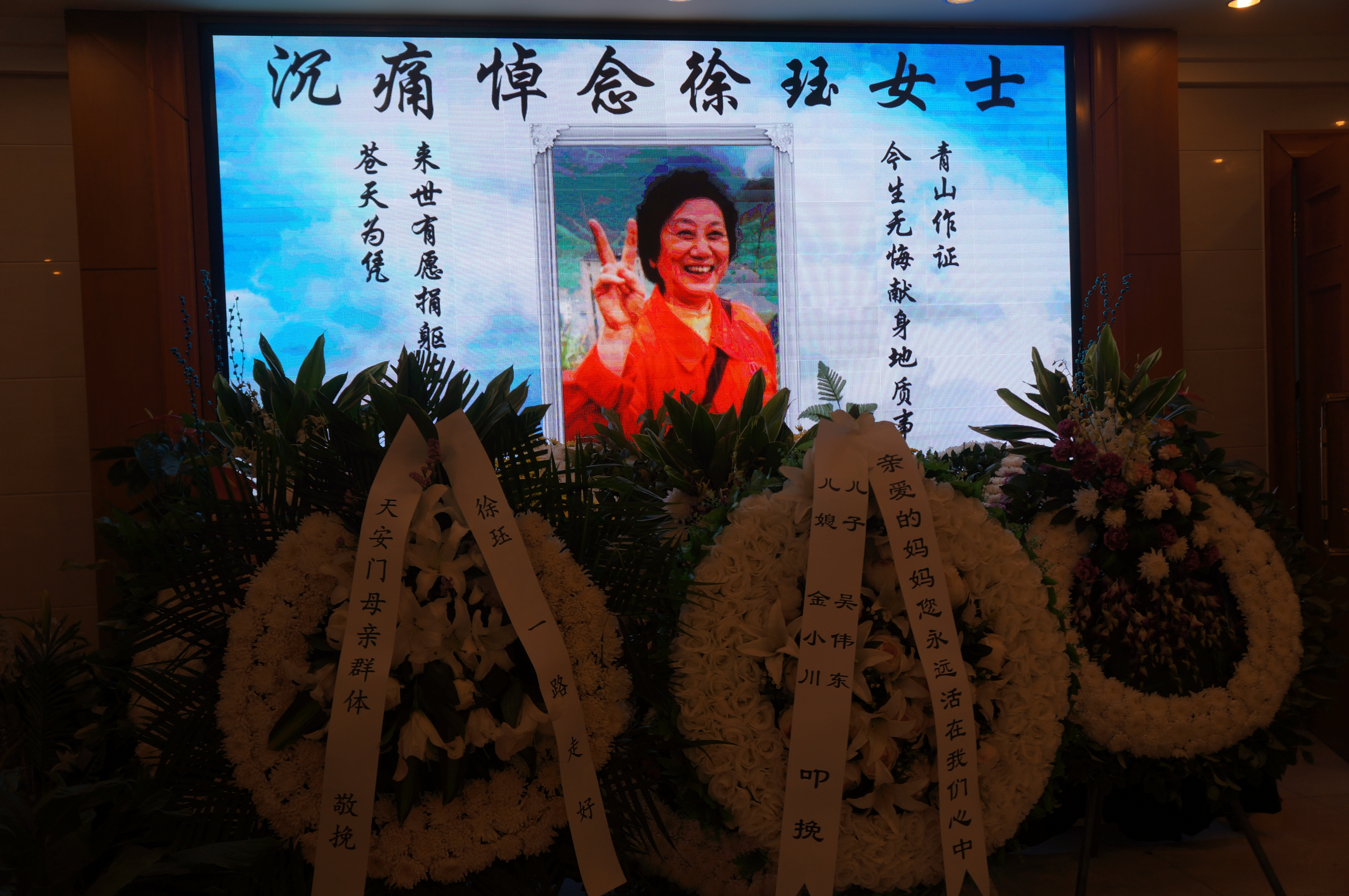 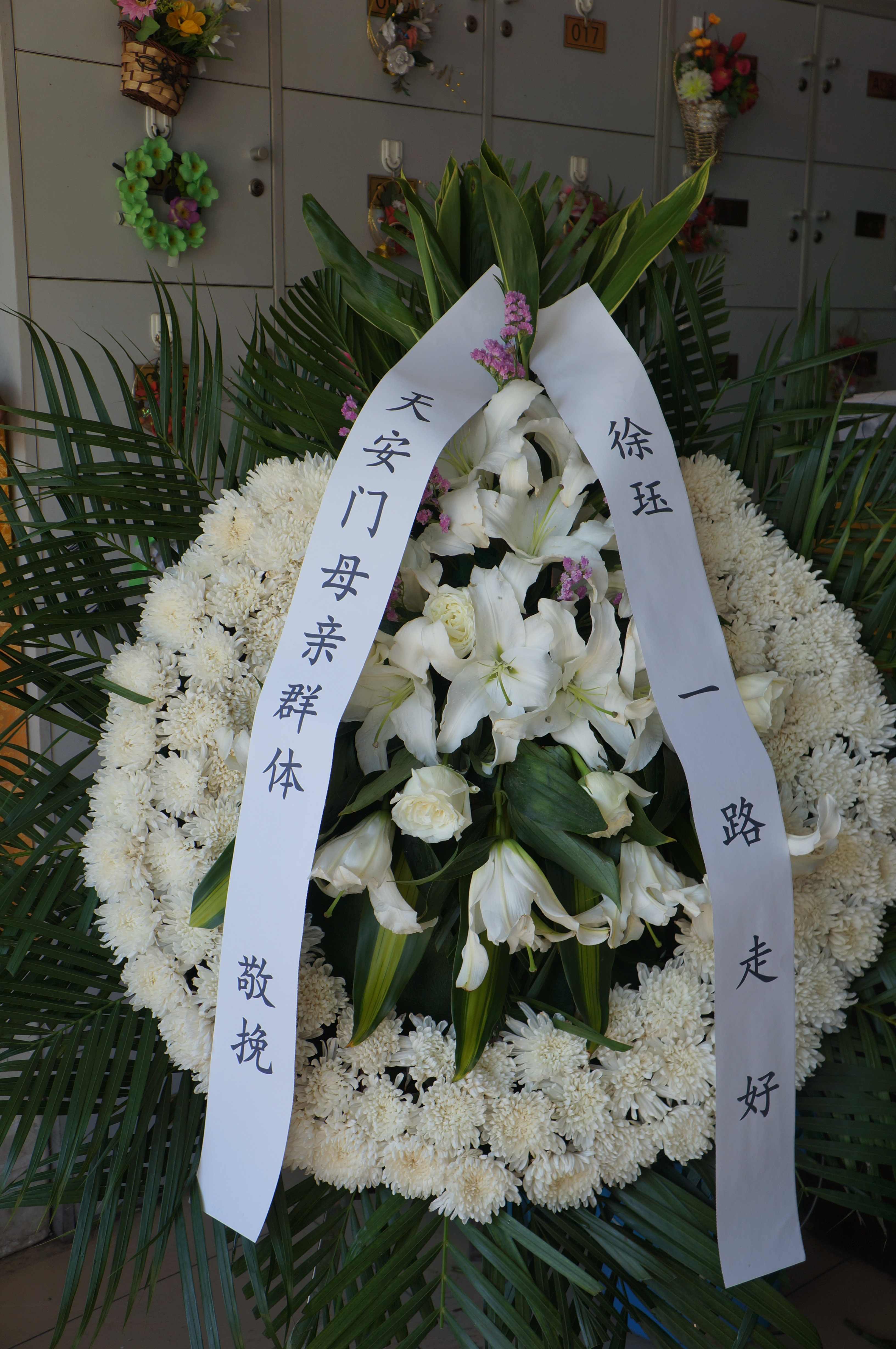 (The wreath presented by the Tiananmen Mother Group)