The Qi’s Cultural Foundation of Australia

The Special Prize of AUD$3,000 ($3,068) was awarded to Mr. Dhondup Wangchen, cinematogpher and producer of the documentary film “Leaving Fear Behind,” on September 2 on the occasion of the Tibetan Democracy Day in Dharamsala. Nominated by the Tibetan writer Woeser, Mr. Dhondup is currently serving a 6-year prison term for making the documentary. The award announcement said that “as a Chinese civil society organization, QCFA feels shamed and wants to use this opportunity to express our true guilt to several million of our Tibetan brothers and sisters.” Dhonduo Wangchen’s wife Lhamo Tso said in the acceptance speech which she wrote on her husband’s behalf that the award “would bring better understanding between Han Chinese and Tibetans.” At the award ceremony, the speech was read by their 11-year-old daughter, Lhamo Dolma, who also accepted the prize on behalf of her father.

The Qi’s Cultural Foundation of Australia has completed its Fifth

The Qi’s Cultural Foundation of Australia awarded its Fifth Special Prize of "Make a Better China Award" to Mr. Dhondup Wangchen, photographer and producer of the documentary film "Leaving Fear Behind" on 2nd September on the occasion of the Tibetan Democracy Day in Dharamsala. He was nominated for this prize by Tibetan writer Woeser.

Dhondup Wangchen was sentenced to six years imprisonment for making this documentary. He is still in jail. His wife Lhamo Tso wrote the acceptance speech and his 11 years old daughter Lhamo Dolma has read and received the certificate on behalf of her father, the prize AUD$ 3000 dollars will be sent to his wife straight away.

Honourable His Holiness the Dalai Lama and Karmapa Rinpoche,

Today, 2nd September, a grand function is being held to celebrate the Tibetan Democracy Day.  I am standing here in Dharamsala - the democratic holy land of the Tibetan people. On behalf of The Qi’s Cultural Foundation of Australia (QCFA), we hereby present the fifth "Make a Better China Award" special award.

Thanks to the Tibetan writer Woeser's recommendation, this award is given to Tibetan photographer and producer, Mr. Dhondup Wangchen, and his documentary movie "Leaving Fear Behind."   Dhondup Wangchen recorded over a hundred ordinary Tibetan people's aspirations inside Tibet. He showed the Tibetan people's desire for freedom of religious belief, the freedom to practice their own culture, and the freedom to decide how to live their lives. They also demanded the return of His Holiness the Dalai Lama to his land and home.

The Qi Cultural Foundation appreciates Dhondup Wangchen's courage and his willingness to shoulder the responsibility for this project.

But Dhondup Wangchen was imprisoned and has experienced six years of pain in jail, leaving behind a broken family, with his wife waiting for her dear husband to return. His young daughter misses her loving father day and night. We urge the Chinese Government to immediately and unconditionally release Dhondup Wangchen, and to restore his reputation and compensate him.

The Tibetan people have lived in this land for generations.  They are wise, honest and kind-hearted.  They have their own unique culture, religion and lifestyles. The Tibetan people have never  bullied other ethnic groups throughout history, but the Han Chinese have used their strength and power to force Tibetans to change their way of life.  This practice continues to the present day.

As a Chinese civil society organization, The Qi’s Cultural Foundation of Australia (QCFA) feels shamed and wants to use this opportunity to express our true guilt to several million of our Tibetan brothers and sisters - we are sorry!

2012 is a very unfortunate year. Over 50 Tibetans have sacrificed their own lives in a series of tragic self-immolations to show their conviction - "we would rather die than live without freedom."  Most of them were of a young age, with their lives just beginning to bloom.

When fire burns Tibetan flesh and blood, we -- along with all Tibetan people -- feel the pain of broken hearts; experiencing the pain of life giving way to the torment of death.

Han Chinese, Tibetans and other ethnic groups in China have also seen their freedom of speech and freedom of belief subjected to relentless deprivation and infringement. We should join our hands together and make efforts to change this unreasonable state.

We hope this award will be able to make one small step to promote mutual understanding between Tibetans and Han Chinese. Only in this way can we achieve the unity of the nationalities based on mutual equality.

Recommendations to Award to Dhondup Wangchen 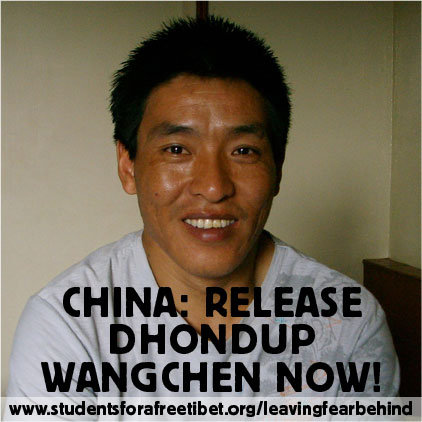 The documentary film "Leaving Fear behind ", was made by Dhondup Wangchen before the March 2008 mass protest which swept across Tibet. This is the first film, recording the truth and eye witness accounts of Tibetans conducted by a Tibetan.

The writer and director of this film was Dhondup Wangchen, a 35 year-old farmer from Amdo, son of an old couple, husband of a weak wife and the father of 4 young children. He along with Jigme Gyatso, a monk, with a motorbike and simple video camera visited many places in Tibet for about one and half years. They interviewed more than one hundred people consisting of men, woman, young, old, monks, nomads, farmers, business people and students on their views on the Beijing Olympic Games, His Holiness the Dalai Lama and China’s rule over Tibet.

Dhondup Wangchen was arrested in March 2008 and in a secret trial sentenced him to 6 years imprisonment accusing him of plotting to over throw the government. He is in jail somewhere in Xining in Qinghai Province. For each minute of his 25-Minute film, Dhondup Wangchen has to undergo 88 days of imprisonment. Jigme was also imprisoned and undergo tremendous sufferings.

What did the film record? The film recorded the true feelings of the ordinary Tibetan people. People said, “We (Government) got the right to host the Olympics by promising the world to improve the situation in both China and Tibet. But after that people did not get freedom and democracy but more repression”.

"Our language faces crisis. There are Chinese everywhere in Tibet. You can see and hear Chinese everywhere.  We Tibetans are not a nation without culture. We have carried forward our ancestor's rich culture.” "We are not allowed to hang the photos of His Holiness the Dalai Lama on the wall. We have to hide the pictures. If the government finds them, it will be confiscated”.

For me, I have seen the film several times on the internet. What impressed me the most is a weak and poor old monk.  He sat at a dark corner and said with sobbing dream, but it is hard to be true. His Holiness the Dalai Lama!  I pray to you…… As long as I hear his name, my heart fills with loyalty, belief and deep sadness. I feel I am mentally and physically exhausted and feel walking alone a dark and endless path”.

In fact, the film recorded the voices from the Tibetans who have been suppressed for a long time. It recorded their lost pains of suffering, fervent wishes and determination to carry on. Dhonduo Wangchen’s suffering proved that he truthfully recorded the facts. One of his friend said "The truth is so simple. If you spend only 25 minutes to see the film “Leaving Fear Behind", you are sure to know the background, reasons and unavoidability of the protests”.

Up to now, the film has been shown in over 30 countries and translated into 7 languages including Chinese. Meanwhile, the action to appeal to free Dhondup Wangchen is being carried out in many cities all over the world such as Washington DC, New York, London, Vancouver, Paris, Zurich, Frankfurt, Munich, Tokyo and Taipei.

Thus, I recommend the film produced by Dhondup Wangchen for the special award of the Australia Qi’s Cultural Foundation’s Prize for this year.

The Qi’s Cultural Foundation of Australia conferred its Fifth Special Prize of "Make a Better China Award" on my husband, Dhondup Wangchen, which was recommended by noted Tibetan writer, Ms. Woeser. Myself and my whole family felt greatly honoured after knowing this.

Although Mr Dhondup Wangchen was put behind bars by Chinese Communist Party (CCP), the Qi’s Cultural Foundation as a Chinese civil society decided to present its special prize to Dhondup Wangchen as a gesture of its support for Tibetans and appreciation of his courage and sense of responsibility. This special prize not only honoured Dhondup Wangchen and his family, it is also a big consolation and encouragement to the six million Tibetans who are suffering the suppression by CCP.

Today is a very special day, but Mr Dhondup Wangchen is still in jail, and many other Tibetan political prisoners were also suffering the brutality of Chinese authorities. We believe that all of them would be very happy and touched, when they hear the news of a civil society organization formed by Han Chinese honoring a Tibetan political prison with its special prize. It would bring better understanding between the Han and Tibetans, and we believe many more Han Chinese will stand up to support the just cause of Tibetans.

The situation inside Tibet continues to deteriorate as more than 51 Tibetans have set themselves on fire in protest against the continuous occupation of Tibet by the People's Republic of China. The self-immolators have called for the return of His Holiness the Dalai Lama and freedom for Tibetans. But the Chinese government, instead of addressing the underlying causes of the self-immolations, have stepped up military crackdown on Tibetans and detained innocent Tibetans everyday. The Qi’s Cultural Foundation’s special prize was not only given to my husband Dhondup Wangchen, but in recognition of all those Tibetans, male and female, who have dedicated their life fighting for the freedom of six million Tibetans.

Therefore, today, on behalf of Dhondup Wangchen and his family, and on behalf of all Tibetans prisoners, I deeply thank the four committees and two volunteers of The Qi’s Cultural Foundation for personally coming to Dharamsala to give this special prize and the certificate as an expression of their sympathy and support for Tibetan people's struggle for freedom.

Finally, I would like to take this opportunity to appeal to the international community, especially the Chinese society, to face up to Tibet's history and the current reality, and support in finding a lasting solution to the problem of Tibet through mutual respect, understanding and dialogue.

I once again thank The Qi’s Cultural Foundation.