Rights defender Cao Shunli (曹顺利), who has been missing since September 14, has been pressing the Chinese government in recent years to include the participation of petitioners and rights defenders in a process that affects the entire Chinese society: improving human rights. She has focused her efforts in two specific areas: formulating the country’s domestic plans to advance human rights, and reporting the progress to the UN Human Rights Council in advance of its Universal Periodic Reviews (UPR).

The group of documents that Human Rights in China has compiled reflects Cao’s systematic pursuit of her goal using the law and the court system, as well as the international human rights mechanisms, to press for greater transparency and accountability, and the Chinese authorities’ systematic resistance to such participation by invoking, among other reasons, state secrecy.

The documents span nearly five years, from 2008 to 2013. Among the 2013 documents is Cao’s report to the UN Human Rights Council, submitted on March 1 under the name of the group Rights Campaign, in advance of the upcoming Universal Periodic Review of China that is scheduled for October 22, 2013. (See below for an English translation of this report by Human Rights in China.)

Other documents include multiple requests to the Ministry of Foreign Affairs for information on the process of its writing the national human rights reports for the 2009 and 2013 Universal Periodic Reviews, and to the Information Office of the State Council for information on the process of its drafting the National Human Rights Action Plans; replies from the Ministry of Foreign Affairs; an administrative complaint filed against the Ministry of Foreign Affairs for refusing to disclose the requested information; the court’s response; and a draft appeal to the Beijing Municipal High People’s Court to challenge the lower’s court refusal to accept the administrative complaint. (See below for the English titles and summaries, and the original documents in Chinese.)

Cao was disappeared on the day she was scheduled to fly to Geneva to attend a training course on international human rights advocacy. She had also planned to monitor the October 22 UPR of China. Her disappearance has gained increasing international attention including from the UN Committee on the Rights of the Child, which raised her case in a question to the Chinese delegation, during its review of China’s progress in implementing international obligations in protecting children’s rights.

The Chinese government has not publicly accounted for Cao’s whereabouts. On October 3, Beijing police officers took away petitioners who were engaged in sit-ins in front of the Ministry of Foreign and reportedly told some of them that Cao has been criminally detained. To date, sources tell HRIC that Cao’s family has not yet received a criminal detention notice.

On the day that Cao Shunli disappeared, authorities also blocked Shanghai activist Chen Jianfang (陈建芳) from flying to Geneva to attend the same training course. She was stopped at the Exit and Entry Frontier Inspection counter at the Guangzhou Baiyun Airport and prevented from boarding her flight. She said that police took away her boarding pass and passport without providing any reason. She was released the same day with her passport returned to her. The police took Chen back to the airport police station the next day and served her an administrative penalty notice for “forcing her way into the airport's restricted area” and for “disrupting public order.” She was also taken and questioned by the police after returning to Shanghai.

[Compiled by Human Rights in China]

1. Request to the Ministry of Foreign Affairs for Participation by Petitioners and Right Defenders in the Preparation of the National Human Rights Action Plan and the UPR State Human Rights Report (向国家外交部提交的申请)

The signers request that the MFA take the lead in complying with international and UN standards in the preparation and implementation of the National Human Rights Action Plan by:

2. Reply from the Ministry of Foreign Affairs (国家外交部作出的答复)

The Ministry of Foreign Affairs states that: 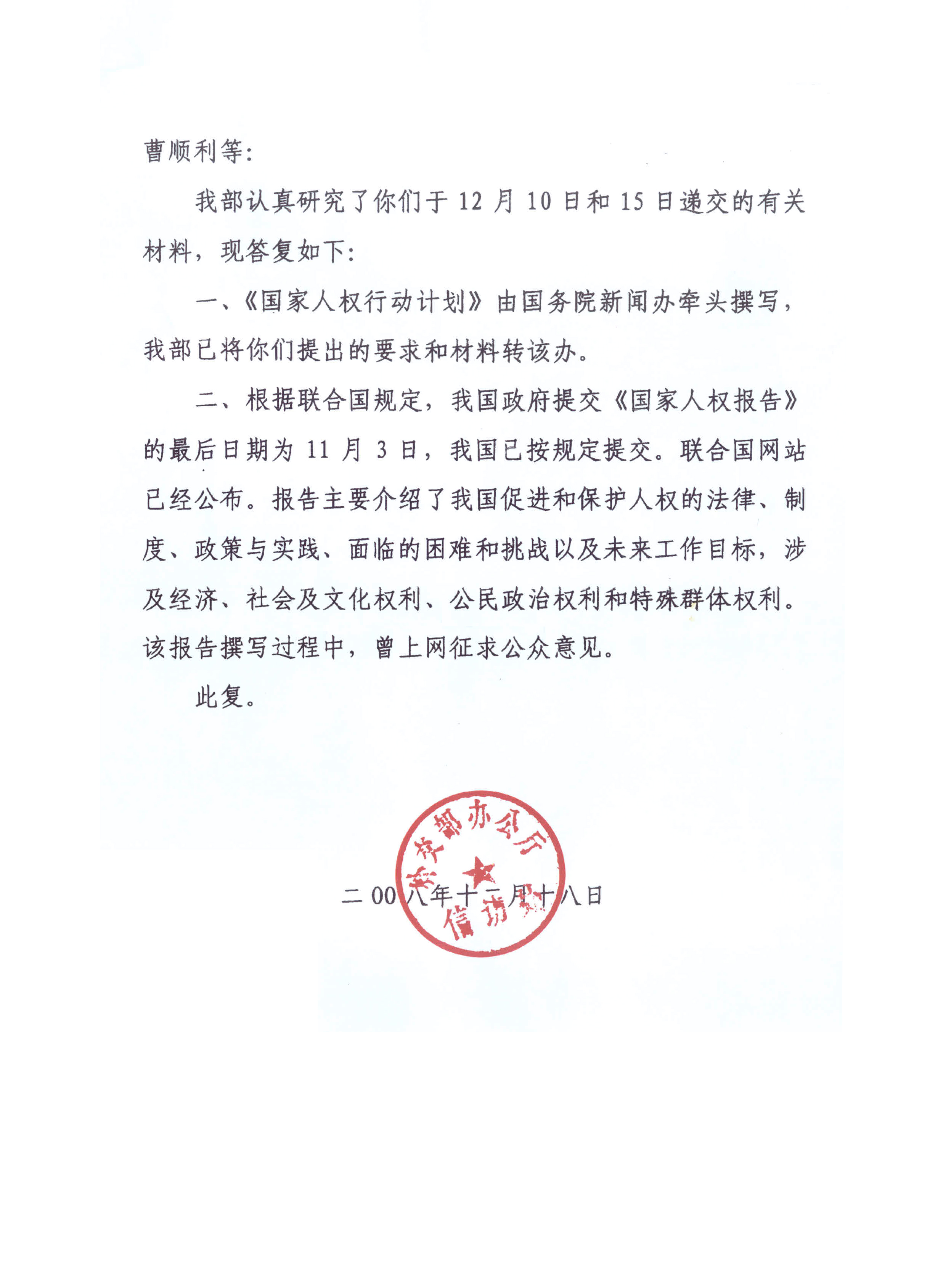 3. Request to the Information Office of the State Council for Participation by Petitioners and Right Defenders in the Preparation of the 2012-2015 National Human Rights Action Plan (向国务院新闻办公室提交的申请书)

The request describes reprisals against petitioners and rights defenders who called for public participation in drafting the first National Human Rights Action Plan (2009-2010), and urges the government to abide by the UN Handbook on National Human Rights Plans of Action and international norms to:

[Delivered by Cao Shunli, Chen Fengqiang, and others, as referenced in paragraph 10 of the Rights Campaign’s UPR submission, March 1, 2013.]

The application requests the Information Office of the State Council to make public:

5. Open Letter to Ministry of Public Security concerning Accountability for Violations of the Right to Freedom of Peaceful Assembly and Expression (给国家公安部的公开信)

By petitioners and rights defenders from different locations.

The letter, urges the Ministry of Public Security to:

6. Request to the Ministry of Foreign Affairs to Ensure Transparency and Petitioners and Rights Defenders’ Participation in the Preparation of Human Rights Reports and Action plans (向国家外交部提交的申请书)

[Referenced in paragraph 13 of the Rights Campaign’s UPR submission, March 1, 2013.]

The letter recounts the background of the efforts and requests of a group of petitioners and rights defenders submitted to the MFA and urges the MFA to:

[Referenced in paragraph 13 of the Rights Campaign’s UPR submission, March 1, 2013.]

The application requests the MFA to make public the following information:

8. Reply from the Ministry of Foreign Affairs (国家外交部作出的答复)

The Ministry of Foreign Affairs states the following: 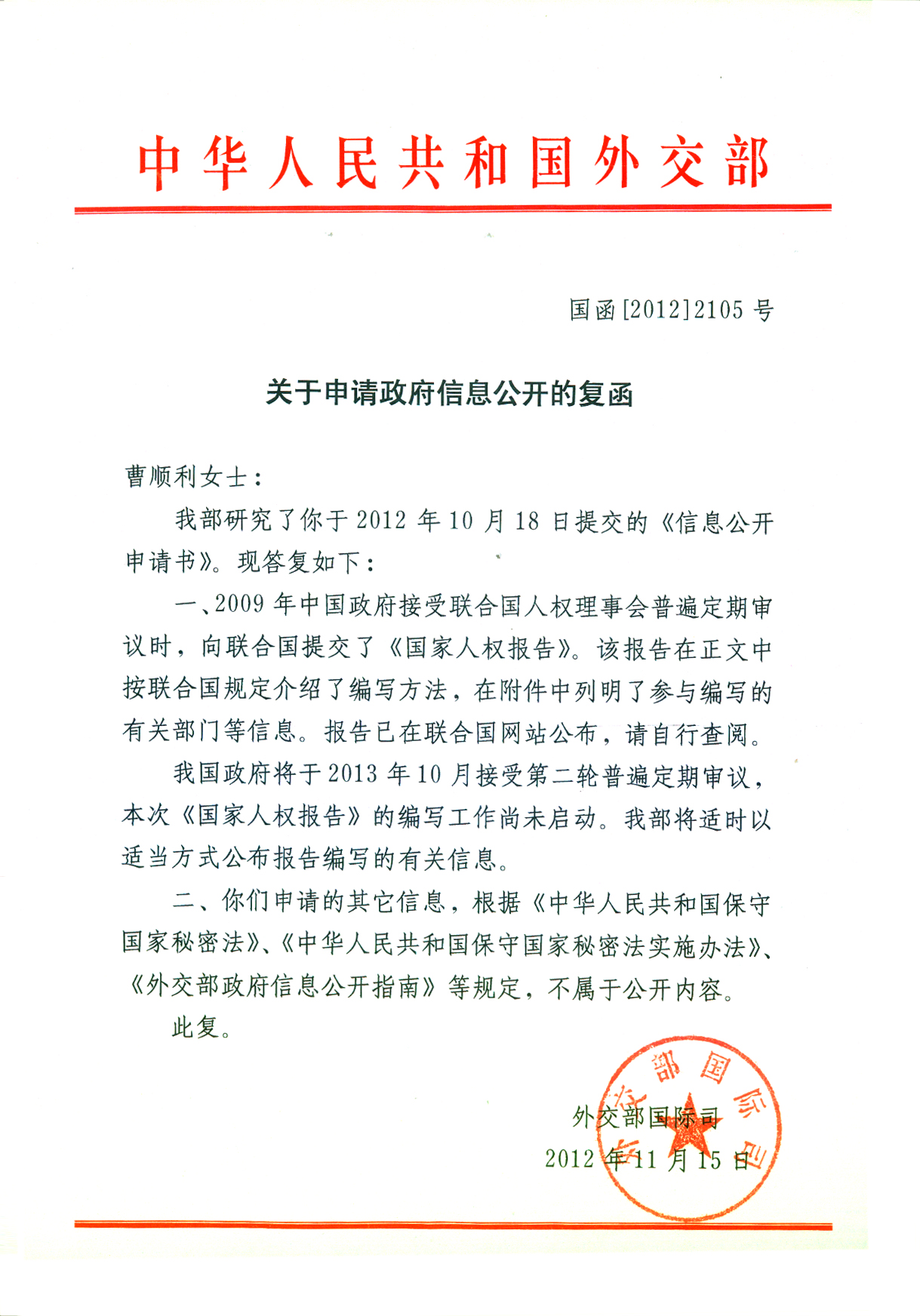 9. Report to the General Office of the State Council concerning OGI Requests Made to the Information Office (向国务院办公厅提交的举报信)

[Referenced in paragraph 12 of the Rights Campaign’s UPR submission, March 1, 2013.]

10. Application to the Ministry of Foreign Affairs for Reconsideration of its November 2012 Response (向国家外交部提出的复议申请)

Submitted by 64 petitioners and rights defenders [as referenced in paragraph 13 of the Rights Campaign’s UPR submission, March 1, 2013].

The application requests the MFA to:

The application argues that even if some of the requested information is classified, the applicant, as a stakeholder in the State Human Rights Report, should be given access to the classified information and be able to participate in the drafting process on an equal footing with the other NGOs that China said had participated in the drafting of the 2009 State Human Rights Report.

11. The Ministry of Foreign Affairs's Decision on the Application for Reconsideration (外交部3月19日复议决定)

In a decision addressed to applicant Cao Shunli, the MFA upholds its November 15, 2012 decision and states the following: 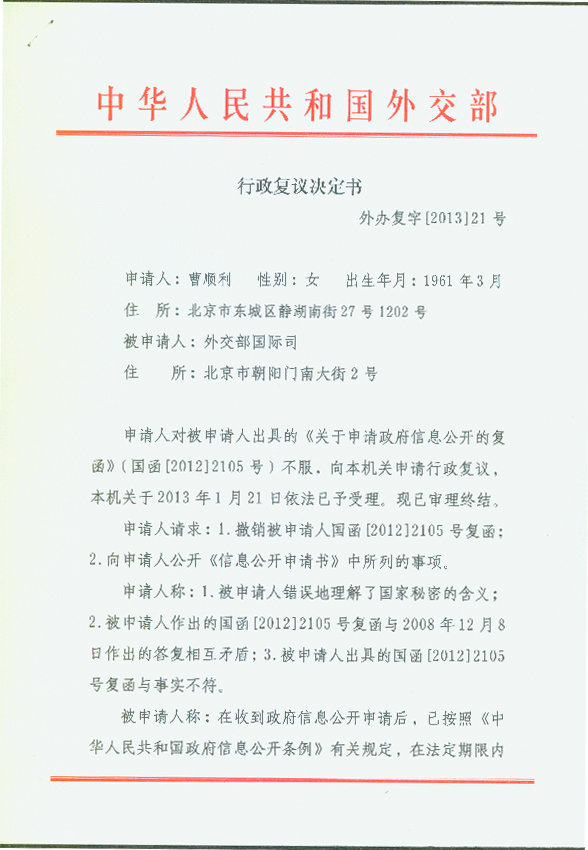 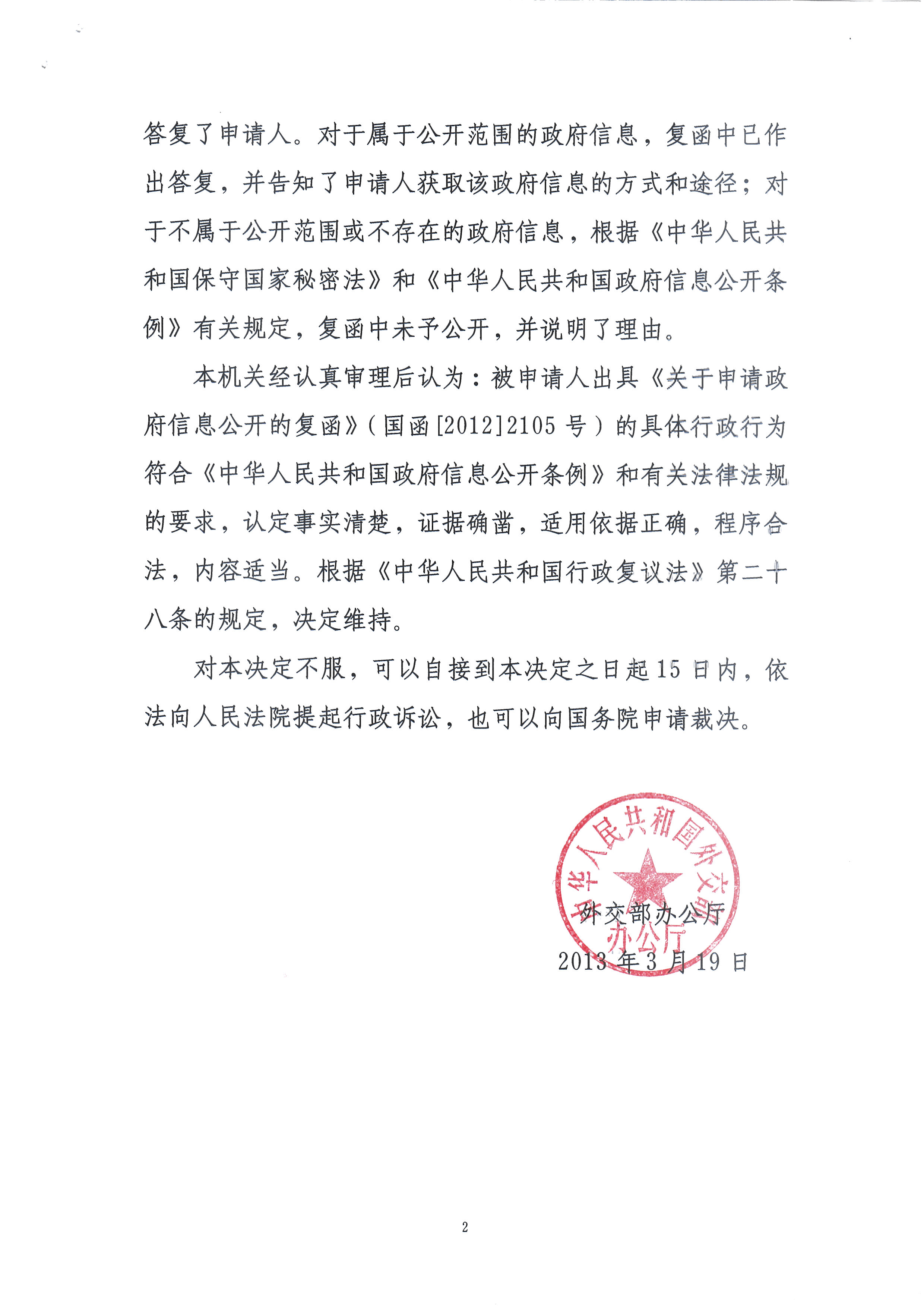 12. Administrative Complaint against the Ministry of Foreign Affairs (行政诉状国家外交部)

This administrative complaint requests the Beijing No.  2 Intermediate People's Court to annul the MFA response [of 2013. 03. 19] and order it to make public the information requested in the OGI Application to the Ministry of Foreign Affairs [of 2012. 10. 18].

Issued by the Ministry of Foreign Affairs.

The MFA rejects an appeal made by Ning Jinxia that it revoke its earlier decision to not make available information requested by Cao Shunli’s OGI Application of 2012. 10. 18. 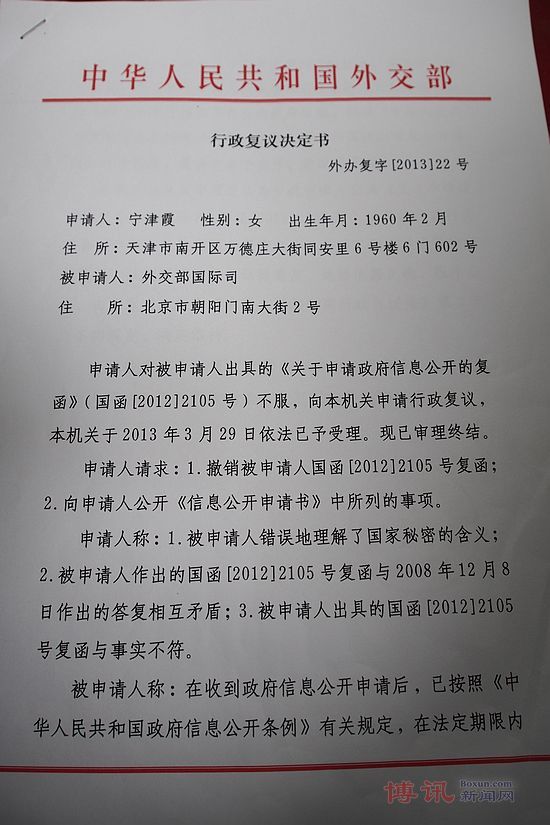 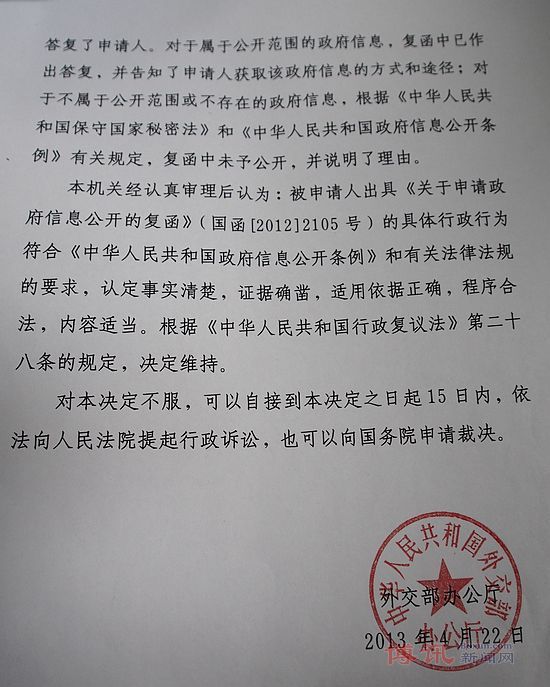 14. Decision of the Beijing No.  2 Intermediate People’s Court (北京市第二中级人民法院行政裁定书)

The Court refuses to accept the administrative complaint on the ground that the Ministry of Foreign Affairs's submission of a state report to the UN Human Rights Council for the UPR is a diplomatic action and thus falls outside of the court's jurisdiction, in accordance with the Administrative Procedure Law (APL) and the Supreme People's Court's interpretation of the APL. 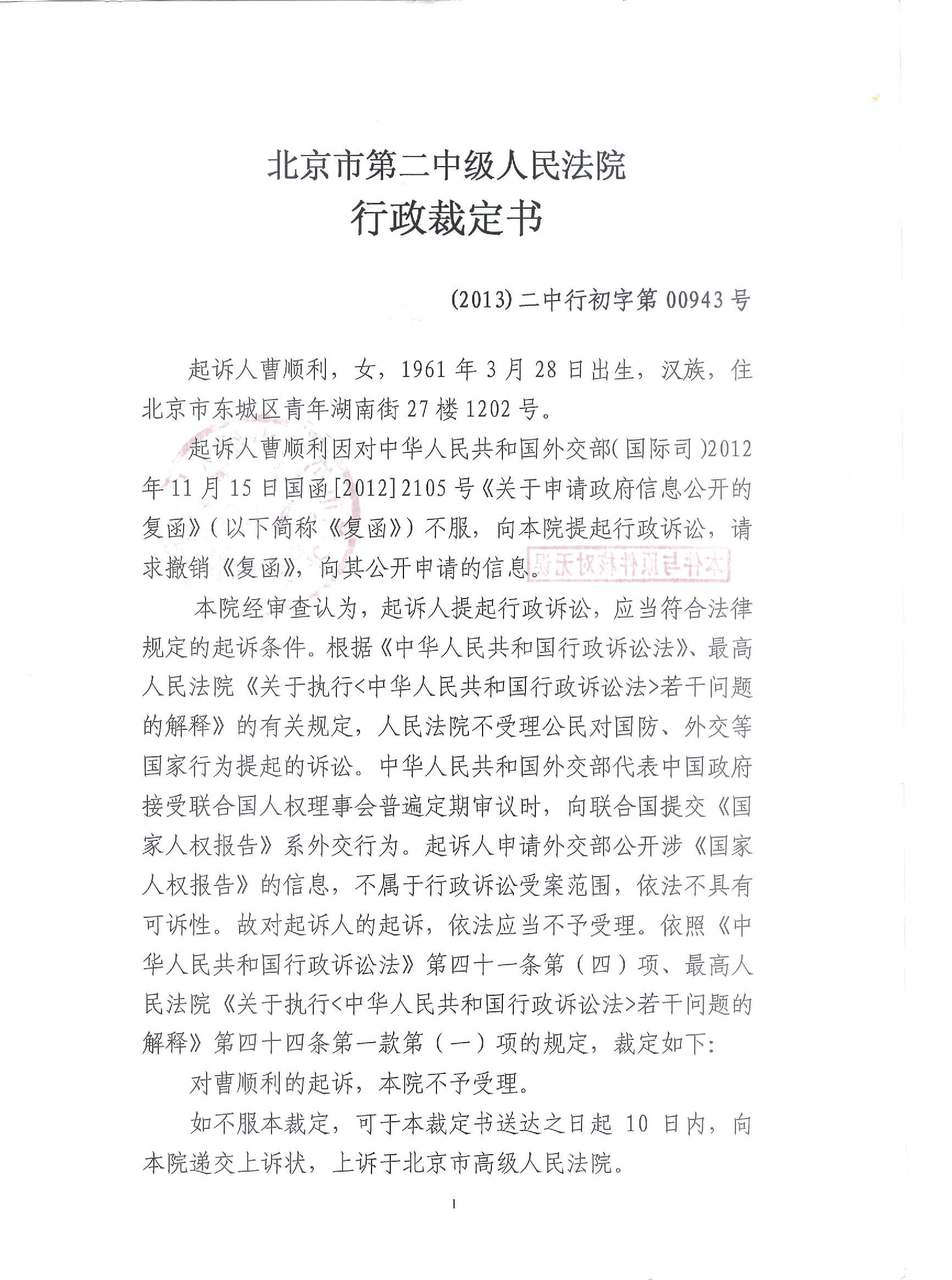 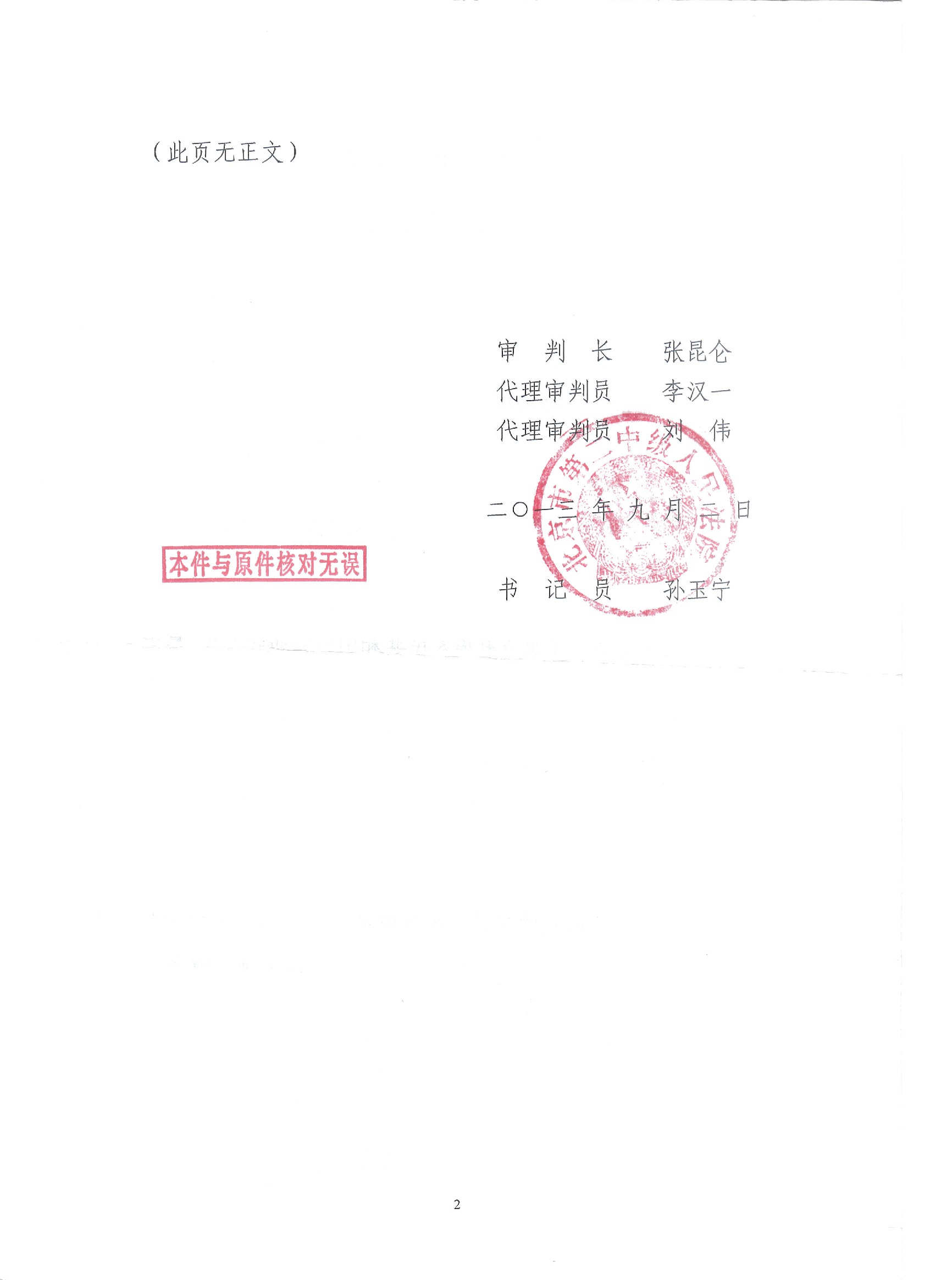