The 2022 Winter Olympic Games in Beijing concluded on February 20, 2022, under a cloud of controversy highlighting the inappropriateness of awarding a country with an abysmal human rights record the honor of hosting an event meant to celebrate human dignity.

In the lead-up to the Games, as if to validate the concerns—expressed in protest statements from civil society groups; diplomatic boycotts by governments (including the U.S., UK, Japan, Australia, and Denmark); and critical commentaries from diverse sectors—a Chinese official explicitly warned athletes that, while in China, they would not be free to express themselves and that there would be “certain punishment” for behavior or speech “against the Chinese laws and regulations.”

While athletes did not speak out when they were in China, many did make their voices heard before and after the Games.  As the quotes collected by HRIC show: athletes are indeed concerned about the International Olympic Committee’s host-city decision; serious human rights abuses in China, including of Uyghurs and other ethnic Muslims; the security of athletes such as the tennis champion Peng Shuai who was essentially disappeared by the authorities after she alleged sexual coercion by a former high-level government official; and the need for greater change.

One of the athletes, Swedish speed skater Nils van der Poel, donated one of his two gold medals to the Chinese-born Swedish citizen Gui Minhai, who is imprisoned in China (see below). “I think for a greater change to occur [in China] there must be a power that is beyond the Olympics. It has to be change at a remarkable scale. . . . However, the fact that people are talking about this issue, and the Olympics are bringing it to light is already a step in the right direction.” “Just because something terrible has happened doesn’t mean everyone (in China) supports what is going on or believes that’s the right thing to do.” “[The IOC has] shown that their relationship with the Chinese Communist Party (CCP) supersedes their care for athletes. They have prioritised that relationship over Peng Shuai’s safety. And that’s emblematic of what they’ve done in general, by awarding the games to Beijing. . . .

“Not only that, but the athletes’ safety is at stake. We have the organising committee in Beijing threatening to punish any athlete that speaks out, but Chinese law when it comes to speech is extremely opaque. We don’t have the IOC defending the athletes’ right to speak out in that situation and what we’ve seen is that they won’t defend athletes.” “I think that the IOC has the power to create change in those countries for the better and could easily do that.” “What I can say is we absolutely acknowledge the horrifying things that we've seen happening to the Uyghurs. I read somewhere the other day that it's the largest number of people held in internment and labor camps since World War II. I mean, these are horrifying human rights abuses that we're seeing happening.” “Man hätte Olympia nicht nach Peking geben dürfen.” (“You shouldn’t have given the Olympics to Beijing.”) 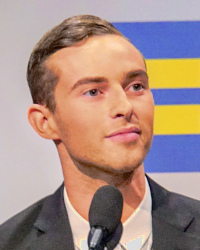 "[Selecting China as host] makes me think of being rewarded for bad behaviour.

"Always the hope is that (the Olympics) helps better the hosting nation as well, but I do agree that in light of all of the human rights violations in China, it does make you question why were they still allowed to host these Games?" “I think it is extremely irresponsible to give [the Olympics] to a country that violates human rights as blatantly as the Chinese regime is doing.”

NOTE: After the Games, Van der Poel donated one of his gold medals to Chinese-born Swedish citizen Gui Minhai, who is imprisoned in China for allegedly “illegally providing intelligence overseas” and who had been originally disappeared in late 2015 after publishing books that were critical of the Chinese government. Van der Poel told a reporter:

“I want human rights abuses in China to be reduced and Gui Minhai to be released. It is a lot to ask, but it is the only reasonable thing to wish for. . . .

“I do not speak for all Olympians, but I and my friends in sports have spent our lives striving for the top and the Chinese government uses our dreams as a political weapon to legitimize its regime. It became personal for me and I felt used.” “As athletes, we still retain our humanity. We heard what Evan [Bates] said. We echo his sentiment.”