The Complainant requests: In accordance with the law, investigate the defendant and its respective subordinate offices and bureaus and related personnel’s mass detention and intimidation of lawyers and citizens, “conviction before trial,” and other illegal acts, corrupt politics, and inhuman behavior.

Within days of July 9, 2015, when lawyer Wang Yu was taken away and disappeared by police, more than a dozen lawyers and dozens of citizens in different parts of the country were taken into custody, and more than a hundred other lawyers and hundreds of other citizens were interviewed, summonsed, intimidated, and warned by police. In a situation where family members and defense lawyers had no information on the whereabouts of the detained lawyers and citizens or the crimes they were suspected of, were not allowed to see them, and received no official notices of their detention, official media journalists were able to meet with the detained lawyers and citizens. CCTV and other official media outlets and the police wantonly attacked the lawyers and citizens in custody and made them “self-incriminate” and be “convicted without trial” in the media, creating an atmosphere of terror across the whole country with these inhuman, evil deeds, in flagrant violation of the Criminal Procedure Law.

In accordance with the constitutional rights of a citizen, Yu Wensheng, a victim of torture, brings this complaint to the Supreme People’s Procuratorate against the Ministry of Public Security, in the hope that the Supreme People’s Procuratorate will investigate the Ministry of Public Security and its respective subordinate offices and bureaus and related personnel’s illegal acts, corrupt politics, and inhuman behavior. 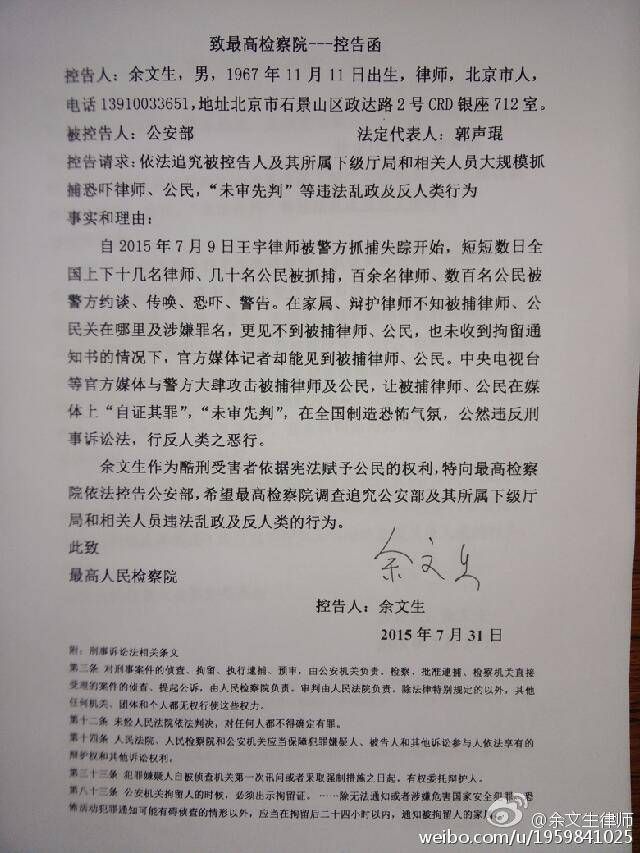