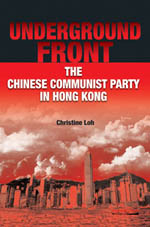 When Christine Loh was a little girl growing up in Hong Kong, she had a fascination with the Communist Party of China (CPC), whose role in the then British colony was a mystery to her. Decades later, and nearly 15 years since Hong Kong was returned to the motherland in 1997, the Party’s doings in what is now called the Hong Kong Special Administrative Region (HKSAR) are still shrouded in secrecy. She points out in Underground Front: The Communist Party in Hong Kong, which she calls a “condensed story” of the CPC in Hong Kong, the Party’s underground status—being involved in every aspect of society and the economy, and yet never really accountable to anyone in Hong Kong—is the cause of many of the area’s problems.

Ms. Loh, a former member of Hong Kong’s Legislative Council who heads Civic Exchange, a non-profit Hong Kong-based policy think tank, says that nowhere else in the world is the ruling party an underground organization, as it is in Hong Kong. “Even more extraordinary,” she writes, “is the fact that as China rises in global importance, the ruling party should feel so uncomfortable about showing itself in the most advanced city in the nation.”

Ms. Loh writes that despite the high level of the Party’s activities in Hong Kong, it has not been officially acknowledged to even be there. During the Second World War, the Party’s office was hidden behind a wholesale tea company, and from 1946, it hid behind the curtains of a news agency. She says that regarding questions as to the Party’s representation in the HKSAR and connections with the government and Chief Executive, the “silence remains deafening more than a decade into life as the HKSAR.”

The book breaks the CPC story in Hong Kong into six phases, spanning more than eight decades and marked by mainland inspired strikes and boycotts between the early 1920s and 1949, riots and deadly bombings in 1967 during the Cultural Revolution, and a propaganda and “united front” campaign launched in the 1980s to pave the way for China’s taking back of the territory. The latter included the co-opting of Hong Kong’s most powerful tycoons, who rushed to trade their support for special favors handed down by Beijing.

One thing is clear throughout the pages of this book. During the past 80 years of involvement in Hong Kong, the Party has always put its own interests above those of the people of Hong Kong.

During the 1930s, Hong Kong was useful to the CPC, which took advantage of the territory’s relatively liberal political environment to set up an operational base in its war against the Kuomingtang in south China.

Between 1949 and the Cultural Revolution, Hong Kong was an active united front and propaganda center for the CPC, as well as a place to gather intelligence. This explains why the Party made no attempt to force the return of the territory: it was more valuable in British, rather than Chinese, hands.

In 1982, the CPC machinery swung into action again, this time to sully the reputation of the British—to show them as evil imperialists—and at the same time cultivate relations with the Hong Kong elite, who would become the front men for Beijing in the HKSAR. Visits to Beijing were arranged for Hong Kong tycoons, where they were given the chance to meet with Deng Xiaoping and other top leaders. In addition, the CPC realized that Hong Kong businessmen’s political leanings were almost always based on business ties. Xu Jiatun, former head of Xinhua News Agency in Hong Kong, who defected to the United States in 1990, admitted in his memoirs that he helped certain Hong Kong entrepreneurs when they ran into financial problems. It is no wonder the CPC was so successful in winning over the Hong Kong elite.

However, when Hong Kong appointees were given a role in drafting the Basic Law, Hong Kong’s constitution, the long and invisible hand of the CPC was never taken off the steering wheel, which means the Hong Kong elite were just puppets.

When the British expressed the need for democratic reform in Hong Kong in the early 1980s, apparently to fulfill their moral obligation to the people of Hong Kong, Beijing’s paranoia flushed to the surface, with the Chinese government worrying that the British were “about to launch a ‘democracy card’ to spoil things for China.” This fear led the CPC in Hong Kong to mobilize large scale opposition to the introduction of direct elections, setting into motion a long-running feud between the two governments that was not good for the territory. The opposition machine included organizations that represented the interests of capitalists, the left-leaning Federation of Trade Unions, which told its members that “eating is more important than voting,” and the Chinese General Chamber of Commerce. Chinese companies also organized signature campaigns among their employees.

Surveys conducted at the time showed, however, that despite the valiant propaganda effort, the majority of Hong Kong people favored direct elections, something the CPC would not budge on.

Most ominous was a program run by the Organization Department of the CPC Central Committee to send cadres to Hong Kong with immigrant permits, their mission was to serve as a fifth column and an insurance policy against the British. In the early 1990s, these cadres formed a pro-government voting bloc in the election to the Legislative Council. Ms. Loh conservatively estimates that more than 83,000 “fifth columnists” moved to Hong Kong from 1983 to 1997.

Even after 1997, the Party continued to be suspicious about the support of the Hong Kong people. When Tung Chee Hwa, Beijing’s choice for the first Chief Executive of the HKSAR, proved to be incompetent, the blame went to Anson Chan, the chief secretary at the time, because the central government believed she had not fully supported Tung. Chan was denounced as a “surviving supporter of the evil British-Hong Kong Administration.” Despite obvious public dissatisfaction with Tung, Beijing appointed him to serve a second term.

Another troubling fact is that, while Hong Kong once had a wide variety of media organizations with different views, since the mid-1990s, most of the media has come under the control of tycoons with big business interests on the mainland. Some are even happy to take over loss-making media companies with no apparent commercial future. Many of these tycoons were given political titles on the mainland.

The danger of this can be seen in the upcoming selection of the next chief executive and elections of Legislative Council members in 2012. In an editorial on December 4 titled, “‘Black Hands’ in Hong Kong,” The Wall Street Journal said that, while Hong Kong was not a full-fledged democracy yet, there was enough uncertainty in the election to give Beijing leaders sleepless nights. The editorial described a widespread and nasty defamation campaign against democratic candidates, orchestrated by the Hong Kong media owned by China and its allies. It also observed that “Beijing’s political interference is reaching ugly new heights.”

Ms. Loh worries that an executive-led government does not necessarily mean a good or competent government, and that with a weak press and low-key politics, those in power will not likely get the hard feedback they need to hear. As the book points out, Beijing, on more than one occasion, has completely misread public sentiment in Hong Kong.

Ms. Loh says that the constant complaint in Hong Kong about the “business-politics collusion” is an indication of the public concern about how the public interest can be safeguarded when economic interests are part of the political system.

She argues that the HKSAR government has put itself into a no-win situation of being an interest coordinator rather than a pathfinder developing policies based on progress. And it fails to understand that there is a generational change in motion among the people of Hong Kong  in which the priorities are social equity, better education, improved public healthcare, cleaning the environment, and building a more people-friendly environment. Unfortunately, the current generation of political leaders—both the government and legislators—are still tied to big ticket, physical infrastructure projects. Ms. Loh concludes that the HKSAR leadership will continue to be unpopular—and ineffectual—as long it fails to confront the vested interests of the tycoon-Party alliance, and is unable to define a new path that the Hong Kong people find compelling.